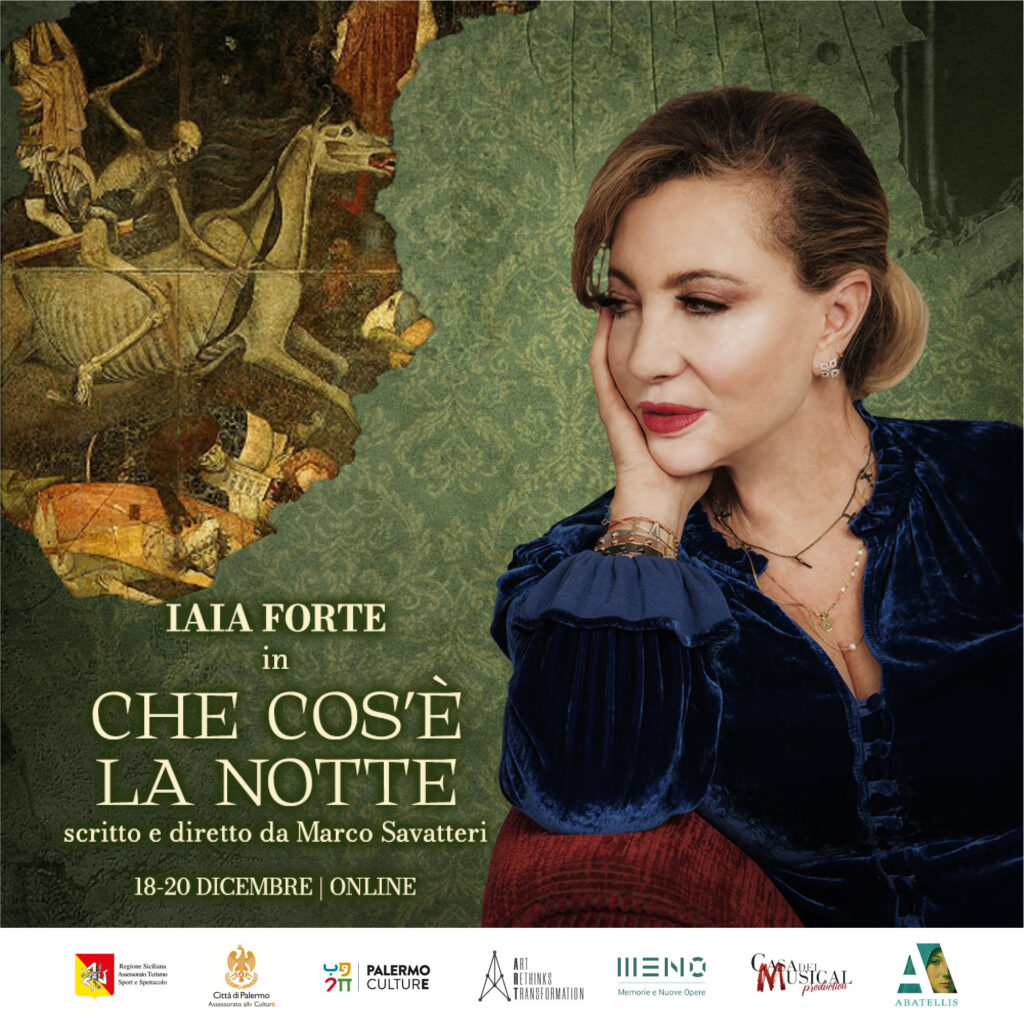 What is the Night with IAIA FORTE

If they knock, open.

So the woman, at the call of that sound, distractedly leaves the tools of the job, while the whole building vibrates in that touch, safe but discreet. She is alone in there, usually the last one to go out, lately one of the few to enter, since outside it is not recommended to live, to stop the contagion.

Yet there was someone outside, and waiting.

She opens the door and remains to peer at the visitor with feigned reverence, without uttering a word; no appointment was scheduled, but they were waiting. Then finally the woman breaks the discomfort and invites him in… Together they cross the cloister of the palace, populated by characters from the past, which is perhaps a present: there are sick and suffering people, ladies and knights, peasants and ragged people; the night is confused with the smoke of the embers: the humans burn. In this world there is the plague but it does not seem to be nicked by it, on the contrary it seems peacefully cradled. The visitor’s gaze rests everywhere and captures everything; the woman is calm and composed, she gets lost in thoughts that she wants to whisper, sometimes she laughs; she proceeds at ease in hell and looks like the Lady. So someone despises her and mocks her, someone fears her, someone else invokes her and asks her for pity.

She is not moved, she turns and continues, entering a garden. Here there is art, hope, there is even beauty; music and singing intertwine in the bodies of cheerful young people, dancing to deceive hell. The woman doesn’t dare approach and lets them continue… it’s not time for her. Finally, in an empty room full of silence, the Woman opens her arms to the visitor. In a single instant he feels her and loses her. In the background “The Triumph of Death”, in which, however, there is only the horse, without the rider. Where is he? How does this story end? A clue is granted: …of all the stories, only one end!

Notes by the author Marco Savatteri

Thinking about a modern subject on the famous fresco “The Triumph of Death”, finding myself “happily but also not” in 2020, I asked myself: but if instead of seeing the work and talking about it, was the work to see us? Thinking about it carefully: how many epochs has this painting seen? We should not forget that it had been commissioned for a hospital, the first public hospital in Palermo. Here the sick people entered and saw the Knight of Death, as a warning for life, sacred and precious. And so how many deaths must this Knight have seen, pleased over the centuries? It was there in the Middle Ages, and it was there in the Great War. And today, perhaps excited by the collective fear, it has decided to go out for a ride, and see how much it is again daily protagonist and superstar of our Covid-like… uh, everyday-like “living and dying”!

And yet on his visit that Knight met life, which did not get tired of living. And even when life is now resigned and opens the door to the unstoppable man, it is life itself, instead of being in woe and despairit allows itself a walk, just in the company of death, far from any useless emotion; it allows itself time, no matter how short, to breathe.

On this walk the Knight chases after the lady and no longer leaves her, but contemplates her in his consideration of life, for a final farewell of compassion and even during a smile towards the Living. The others do not understand this and mock her, obsessed as they are with the fear of death, outraged by those who, like the woman, have learned to be close to it, to accept this death, barefoot, in a dressing gown, for an appointment never taken, yet waited… because of all the stories, the end is one.